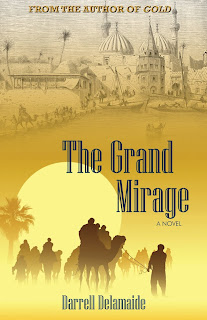 The entire crew at a railroad work site in the Syrian desert is mercilessly slaughtered. A German spy in Constantinople is mutilated and killed as the Kaiser backs the building of the Baghdad Railway, which will connect Berlin to the Persian Gulf. The British Foreign Office dispatches Lord Leighton, an accomplished Orientalist and commissioned army officer, to spy out progress on the railway and to stop it if he can.

The Grand Mirage portrays the epic clash of three empires at the zenith of the imperial age. On the threshold of war in 1910, the British, German and Ottoman empires are vying for position in the Middle East as Berlin pushes for completion of the railway. Britain opposes this potential threat to its rule in India and is eager to exploit the new discoveries of oil in the region. From legendary Constantinople across a rugged terrain of mountains, tundra and desert, Leighton follows the trail to Baghdad as he attempts to fulfill his mission.

The Grand Mirage is an historical thriller that illuminates issues of oil and power we are still wrestling with today. It combines Wilbur Smith’s sense of rugged adventure, Eric Ambler’s taste for intrigue and Alan Furst’s period atmosphere to transport the reader back to an exotic Orient now lost to history.

Delamaide is working on a second Lord Leighton thriller, this one set largely in Cairo and tentatively titled Black Sands.