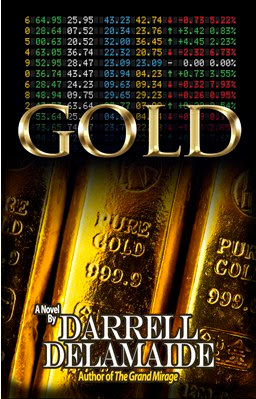 A crucial telex disappears from a newsroom in London and an editor turns up dead outside Geneva. Terrorists sabotage gold mines in South Africa, throwing global markets into a tailspin while the price of gold itself soars. American journalist Drew Dumesnil must follow the trail of a possible conspiracy from London to Switzerland to Kuwait and on to the rich mines of the Rand as he tries to prevent a global financial collapse. Aided by economist Carol Connor at the New York Federal Reserve and thwarted by a shadowy metals trader in Zurich, Drew finds his own life at stake as he tries to dig out the truth.

Gold is a classic financial thriller in the tradition of Joseph Finder, Christopher Reich and Stephen Frey. Though it first appeared two decades ago, it is as current as today’s headlines.

The more things change, the more they stay the same. In fact, the world now seems closer to the global financial catastrophe depicted in Gold than it did when the novel was originally published. As the financial crisis that started in 2008 demonstrated, markets are more interconnected and fragile than ever. And in the summer of 2011, the U.S. government came within a hair's breadth of defaulting on its debt - a calamity that once was the exclusive preserve of fanciful writers of fiction.

Gold was in many ways prescient and for that reason is surprisingly relevant today. Some of the technology in news distribution and commodities trading has changed, but the essential dynamic of the markets and the role of information remains the same.

This new edition is a reprint of the entire original text, without any additions or changes. The first edition was published as a hardback by E.P. Dutton in 1989 and as a mass paperback by Onyx in 1991. All rights have since reverted to me, and I'm pleased to make the novel, long out of print, available once again as an e-book and paperback under the imprint of Barnaby Woods Books.